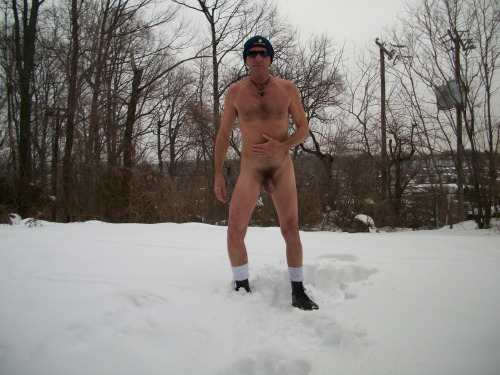 A nudist friend of mine from Massachusetts, USA, wisely informed me that the “proper” term for being bare (naked, nude) in the snow was s’naked. This was back in 2008, before I’d even contemplated anything as absurd and foolish as stripping off my clothes and romping completely carefree and clothes-free in the snow. Although I think of myself as a life-long naturist/nudist, up until that time, being bare and outside in the winter held no appeal to me. I knew that I preferred the heat and humidity and that was it. I had no desire to become a human popsicle!

Massachusetts is one of the New England states located in the upper north-east area of the U.S. James, my friend from there, and I had met online via a naturist/nudist social media site and emailed one another regularly. In one of his communications with me he mentioned that he had been s’naked the previous weekend with some friends of his and that they had returned from engaging in that activity. Curious, I inquired about what the activity entailed. His response to my question was the beginning of my s’naked education. It is a “work-in-progress” to this day.

We continued to email one another discussing this s’naked  activity. I wanted to absorb as much information as possible about what one did naked in the snow in the “dead” of winter. For some reason, my imagination just couldn’t get beyond the image of myself shivering and frostbitten and having to be rescued by a St. Bernard dog off the slopes of the Alps!

James continued to assure me that would not happen. He patiently explained every conceivable game and activity that could be enjoyed in the snow. “Think of it as skinny-dipping only in snow instead of water.” he advised me.

Once I read James’ comment, the proverbial “light-bulb” went off! I knew immediately what he meant and understood the concept of s’naked! I could finally grasp and comprehend exactly what he was describing. The idea of playing bare while in the snow was no longer an alien and vague ideal. At last it was something I could relate to!  It was all about having fun while nude and the snowfall was merely an environment and no longer an impediment.

Unfortunately, by the time I was enlightened regarding s’naked, the winter was almost over and there was no chance of experiencing this activity first-hand and bare until the following winter. Perhaps for the first time in my entire life, I was truly anxious for the 2009 snows to arrive so that I could get outside and get s’naked with my friends. I wanted to enjoy this novel (for me) tradition and feel the sensation of the snowfall against my bare skin!

The summer of 2008 seemed to drag on forever. I thought it would never end as I was eager in anticipation of my first s’naked event. Not even as a young child did I ever look forward to snow.

It wasn’t long after the first inauguration of President Obama that the first measurable snow happened in the Washington, D.C. area. I had two bare practicing (nudist) friends who agreed to get s’naked along with me. We had picked our spot in advance of the snowfall and planned to synchronize our arrival via texting. We thought our advance planning to be fool-proof.

Little did we know that the exact same spot in a local park was a favorite place for two other seasoned s’naked enthusiasts! We were somewhat surprised when they came trudging through the snow, just as bare as we were! We all quickly became acquainted and they were more than happy to share other locations in the Washington, D.C. area where being s’naked was equally popular. It seems we weren’t the only “snow-bunnies” out and about in our nation’s capital!

Author’s Note: The accompanying image with this post is me, proudly bare, on my first s’naked excursion. The bare photos of me published here are filed under the naked me category.