Today, Monday, May 29, 2017, is the Memorial Day holiday in the USA. This is the date, officially observed on the last Monday in May, annually, where all the men and women who sacrificed their lives in the defense of this country are honored and remembered. It is tradition to decorate the graves of the fallen with an American flag that symbolizes a grateful nation saluting all heroes.

It is the custom on this holiday that all USA flags are flown at half-mast until the noon hour as a tribute to those who paid the ultimate price for their country. At noon, the flags are then raised to full-mast for the remainder of the day. It is customary for the U. S. President to lay a memorial wreath at the Tomb of the Unknown Soldier in Arlington National Cemetery on behalf of all the American people.

Memorial Day originated as “Decoration Day” in 1868. It was a date designated by veterans of the U. S. Civil War for decorating the graves of those who died in that conflict with flags and flowers. In 1882, the name was changed from “Decoration Day” to Memorial Day with the observed date being May 31, annually. On June 28, 1963, The U. S. Congress passed the Uniform Monday Holiday Act which moved four holidays from historic dates to a Monday observance.  Memorial Day began being celebrated on the final Monday of May. annually.

Until the 2010 congressional repeal of the military’s ban on gays and lesbians serving openly in the armed services, countless numbers of service-persons were forced to perform their active military duty while hiding their true nature. Many of those same persons died defending a nation and a society that held them in contempt and despised them simply because of who they loved.

Ever since I was in my early teenage years and I realized my same gender attraction, I often wondered how it felt to go to sleep at night, knowing that you could possibly die tomorrow, and willingly march into a battle to defend the freedoms of those who hated you for what you are and condemned your life as depraved. The courage that those men and women demonstrated every day of their military lives amazed me then and continues to do so today. 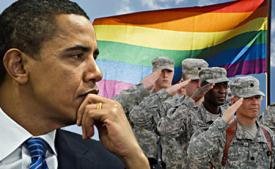 On Memorial Day, Aaron and I would always go to Arlington National Cemetery and watch President Obama lay the memorial wreath at the Tomb of the Unknown Soldier. We both believed it a duty to not only pay tribute to our gay, lesbian, bisexual, transgender and queer (GLBTQ) brothers and sisters who boldly gave their lives for this country; it was also an expression of appreciation to President Barack Obama for having the courage to believe in equality and freedom for all Americans, regardless of who they loved.

Although the current political leadership continues to disparage his presidency and his ideals, he is one of the few leaders of this country who stood proud and tall in his commitment to everyone in this nation, no matter their race, gender, age, political affiliation, gender attraction, religion or physical ability. His legacy will live on long after his critics have ceased their harassments.