The above image shows the facial profile of the Reverend Dr. Martin L. King, Jr. with the Washington Memorial in the background. The statue of Dr. Martin L. King, Jr., is located in Washington, D.C., USA and is a centerpiece of the Martin L. King Memorial Park along the Potomac River. The park and the monuments it contains are a tribute to both the ideals, life, and legacy of Dr. King and honor his place in the history of the USA and celebrate his stature among all the peoples of the world.

Martin Luther King, Junior, (pictured above) was born on January 15, 1929, in Atlanta, Georgia, USA. He was the son of a Christian clergyman and his wife. He was assassinated on April 4, 1968, in Memphis, Tennessee. The Reverend Dr. King headed the Southern Christian Leadership Conference (SCLC), an organization he helped found and is best remembered for his nonviolent protests and activism against institutionalized racial segregation and discrimination in the USA. His actions led to the landmark U. S. Civil Rights Act of 1964, passed by the Congress and signed into law by then-President Lyndon B. Johnson, that theoretically outlawed the often legally sanctioned practices of discrimination and segregation within the United States.

By an Act of Congress, in the USA, public holidays are observed on the Monday closest to the actual date being commemorated.

On August 28, 1963, Dr. King presided over the Washington, DC March for Jobs and Freedom with more than 250,000 participants on the National Mall in Washington, D.C., USA. At this massive gathering, he delivered. eloquently and extemporaneously, his immortal and infamous “I Have A Dream” speech in which he shared his hope for brotherhood and harmony among all people.

In 1964, Dr. King was awarded the Nobel Peace Prize by the late King Gustav VI Adolph of Sweden, This honor was based on his commitment to nonviolence, even when faced with physical force and imprisonment. This award represented his highest international recognition for a young life full of achievements. He was opposed the involvement of American troops in the Vietnam War.

Dr. King was assassinated on April 4, 1968, in Memphis, Tennessee. He was there supporting a strike by local workers for equal pay.

In 1977, Dr. Martin L. King, Jr. was posthumously awarded the U. S. Presidential Medal of Freedom by then-President Jimmy Carter. The citation was based on his efforts for civil right, equality and peace. 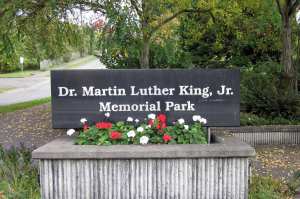 The image, left, denotes the entrance to the Dr. Martin L. King, Jr. Memorial Park on the National Mall in Washington, D.C., USA.

This park is the only public memorial on the National Mall dedicated to a civilian. This memorial was opened to the public by then-President Barack H. Obama on August 22, 2011, as shown in the picture below. 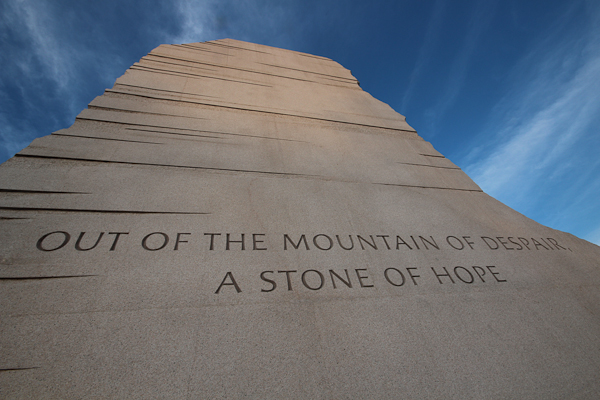 One of the sculptures contained in Dr. King’s Memorial Park lists one of his famous quotes.

The full-face memorial to the Reverend Dr. Martin L. King, Jr., entitled The Stone of Hope. The name of this statue references the quote on the the photo above.