Now that we are rapidly approaching the official beginning of the Summer, 2018, season, I wouldn’t be a very respectful same gender loving (gay) bare practitioner (naturist/nudist) blogger if I failed to extol the annual World Naked Bike Ride (WNBR) events taking place all throughout the Northern Hemisphere. The WNBR takes place in the Southern Hemisphere as well, but as the seasons are reversed, most of those have already taken place. The WNBR began as a primarily environmentally focused activity

to underscore our global dependency on fossil fuel for transportation, to raise awareness of bicycle and pedestrian safety among motorists and to remind all of us of our human vulnerability at the mercy of vehicular traffic. The clothes-free aspect of the ride stresses the human vulnerability message.

The visual image of a group of naked people riding city-streets promoting a common cause is guaranteed to attract the attention of the media and the ire of those who are opposed to public nakedness for any reason. These two factors alone have combined to ensure that the WNBR is enormously popular and successful. The traditional enthusiastic involvement of the GLBTQ community in this endeavor has added to the media attention and to the wrath of the religious extremists. Although to be perfectly honest, almost anything that features bare same gender loving people is more than enough to invite the wrath of most religious extremists.

In the past two weeks, I have shared comments with my fellow blogger, galby68, author of the blog, At Least Have a Friggen Glass (click to view his site) via his blog about the WNBR. Unfortunately, I can’t recall the particular post we were commenting but he has written numerous times about his bike-riding experiences. He remarked that one day he would like to participate in a WNBR event.

Another blogger that I regularly follow, MacPsych, author of MacPysch,me (click title to view his post) about his experience riding in this year’s London World Naked Bike Ride. It was his first time participating and he was thrilled by the opportunity. Please read of his adventure.

These two interactions with these two bloggers over the past two weeks led to my realization that it’s already June and I haven’t posted my annual WNBR post. So this is it. Rather than offer a brief history of the event(s), as I did last year, this year I’m recounting one of my own experiences with the event. To read my post from last year, click here.

The very first WNBR that I participated in was in Washington, D.C. in 2007. It was also the first time the event had ever happened in that city. The ride organizers made certain that we all understood that the laws in the District of Columbia outlawed public nudity and that recent judicial proceedings had determined that prohibition applied to the genitalia only. In other words, males were free to pedal their bicycles wearing nothing more than a jock-strap (athletic supporter). Author’s Note: For those who don’t know, a jock-strap is nothing more than an elastic waistband with a pouch suspended in front to support the man’s penis and testicles.

As this was the very first WNBR in Washington, D.C., it was chaotic and seriously lacking in volunteer support. It hadn’t been publicised which was a shame as I think many of us riders were disappointed in the lack of support. After a very long wait while those of us who registered in advance signed into the rosters, those who had merely ridden over to register on the day of the event were processed and organized into lines to begin. Clearly a case of the last to register are the first to lead.

While my friends and I were removing our shorts in order to be as bare as legally possible, the whistles started the racers off, leaving us frantically struggling to get our shorts stored and then mount our bikes. It was about this same moment that a woman came rushing towards us with a stack of papers. These were the route maps we were supposed to follow.

Someone had forgotten to distribute these at the registration tables. This woman wanted us to pass them out to all the other riders. All four of us are Deaf. The woman became very flustered and frustrated trying to communicate with us. Her arms and hands were flailing around erratically and she proceeded to drop the maps. This was clearly not her best day and we four were obviously not her best messengers to deliver instructions to the WNBR riders, who by this time were no longer in sight.

We decided to do our best to try to locate the rest of the riders. Pedaling fast and doing our best to avoid traffic and stop lights, we began following the route designated on the maps entrusted to us. Then the thought hit us like a ton of bricks: “None of the others had a map. They had no fore-knowledge of the route. They could be anywhere!”

Our mission then became to try to decide where they may have ventured. One of my friends, Curtis, remembered reading something in the newspaper about the ride circling DuPont Circle, in the middle of the city’s unofficial “gay ghetto.” We all headed off in the direction of DuPont Circle, taking Connecticut Avenue all the way. As we approached DuPont Circle, we saw perhaps a dozen riders dismounted off their bicycles inside the surrounding park.

The cyclists were talking with a policeman as we rode to them. They saw us coming  and waved. Evidently, one of the policeman on duty at the WNBR assembly site had been approached by a volunteer when they discovered that no one had passed out the route maps. He had radioed to other officers along the route to direct WNBR participants in the area to the next comfort site (restrooms, water, etc.).

This helpful officer then encouraged all of us to proceed back to the event starting point. It seems that the police presence for the WNBR was about to end and they wanted all participants to reassemble and those who were wearing minimal amounts of clothing (such as us) to be in presentable attire. 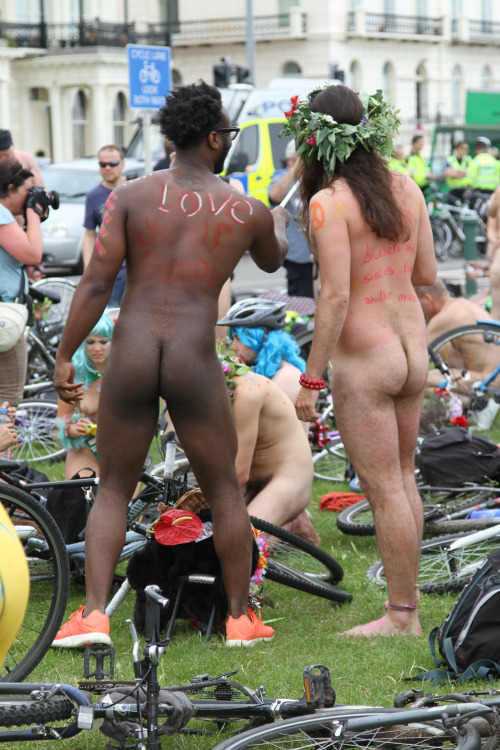 Returning to our departure point, we dismounted and proceeded to pull our shorts over our jock-straps. There weren’t too many others around. Curtis took the maps we were charged with distributing over to a trash-can and disposed of them all. We had no use for them and the 2007 WNBR was officially over.

We were all sorely disappointed in both the attendance for the bike ride and in the logistical planning (or obvious lack thereof). As we stood around the park, discussing our reactions, Curtis and I both vowed that if the ride ever returned to Washington, D.C., we would both volunteer to help organize the event. Our other friends weren’t in the mental space to even contemplate making such a promise.

Once we were “appropriately attired,” we rode our bicycles to Georgetown. If nothing else, we all felt we deserved a decent meal.