Today is the second Friday of October, 2018, Bare GLBTQ History Month for those reading or visiting here at ReNude Pride. If anyone missed last Friday’s installment, we’re taking a step back in time and examining photos of what could perhaps be gay/bisexual bare history. Clothes-free men enjoying the camaraderie of being naked together and having fun. Some people mistakenly believe that the practice of going bare (naked, nude) is a very recent phenomenon and don’t realize that humans have been bare practitioners since the beginning of time.

Humanity is also a very social species. We like being with those we perceive as being most like ourselves. The headline gif image for this series on ReNude Pride bears witness to that fact. A crowd of bare men rushing to be the first to skinny-dip in the ocean. Not only are we a social species, but a competitive one as well.

Given our competitive nature, this week’s Bare GLBTQ History Month theme is Sports. The ancient Greeks began the Olympic tradition competing nude. Clothe-free athletics could possibly be a part of our species DNA.

The above image shows us a bare man holding a USA football and helmet. These two accessories are used today by American football teams. This image dates from the late 1960’s to the early 1970’s based on the young man’s hair style. His sexuality is undetermined as he’s alone in the picture and we’re unable to read his body language. 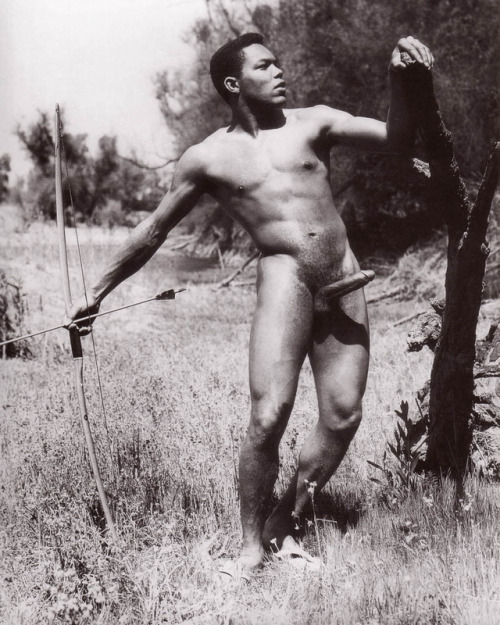 The young man in the above photograph is solo so we have no way to guess his sexual orientation. It is obvious that he is emotionally aroused although we have no way of deciding by whom. His competitive sport is archery. His particular hair style indicates this photo dates from the mid 1950’s to the early 1960’s. From his muscular development is age is probably late teenage years to his early twenties.

The two young men above are wrestling with each other. Their age is approximately middle to late teens. The hairstyles are reflective of the middle 1950’s to the early 1960’s when longer hair became popular. Although they show no outward signs of discomfort in their physical contact and their nudity, we can’t assume anything about their sexuality. 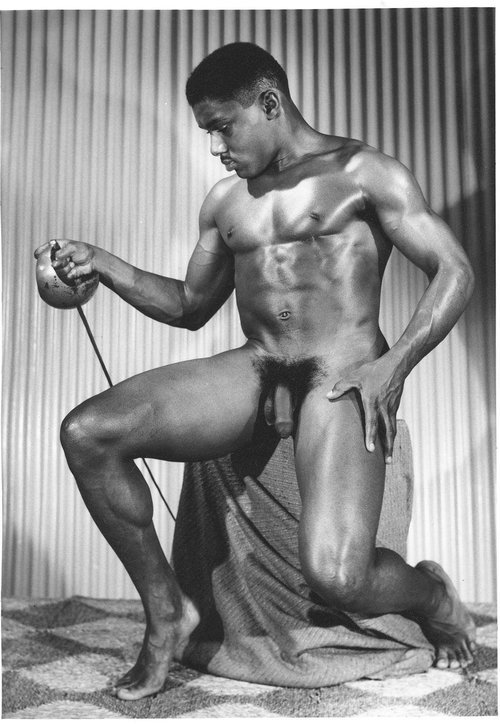 The gentleman in the picture above represents the sport of fencing (sword-fighting). His physical development suggests someone in his early twenties. His haircut and trim moustache were popular for men of his age during the middle 1960’s. As he’s the only person portrayed here, we can make no determination as to his sexuality.

The two men on the tennis court above are proudly bare except for their tennis shoes. The shoe style and their hair are typical of the style fashionable from the very late 1950’s and early 1960’s. Their obvious eye contact and body stance offer the very distinct possibility that they both may be bisexual or gay. Neither one of them seems to be uncomfortable being naked. Their ages are probably early twenties. 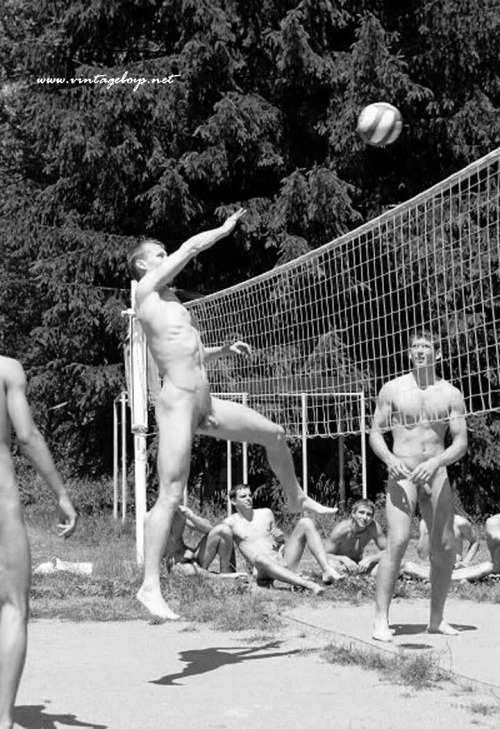 The final picture of this week’s Sports feature shows a group of men either playing or spectating a game of volleyball. Their body language is neutral so there’s no way of knowing their sexual preference. Their hair style suggests early to middle 1960’s. Their ages are late teens based on the physical attributes of the two around the volleyball net.

Finally, I want to reiterate that in the absence of dates, age and relationship status of the men in all the photographs included here from the public record, such information is supposition. Using the visual information only, I have tried to be as accurate as possible using the data indicated for justification. Mistakes are possible. I am only human.