For some strange reason, Halloween is an unofficial holiday that promotes varying degrees of  antisocial and awkward behavior among people, especially here in the USA. First, there are those parents who force their offspring to dress in bizarre and often frightening costumes so that they can go out and solicit candy treats from strangers. These unsuspecting youth are taught to intimidate these same strangers with the taunt: “Trick or treat!” Implying that if you don’t give us a treat, we’ll play a trick (prank) on you.

Right. Point a gun at someone and say: “Your money or your life!” Same principle. Is anyone else concerned over the mixed message that we are sending to our youth? Evidently not as look at the overgrown idiot that was recently elected as president of this country. That was one helluva trick to give someone just because they didn’t give away their candy! 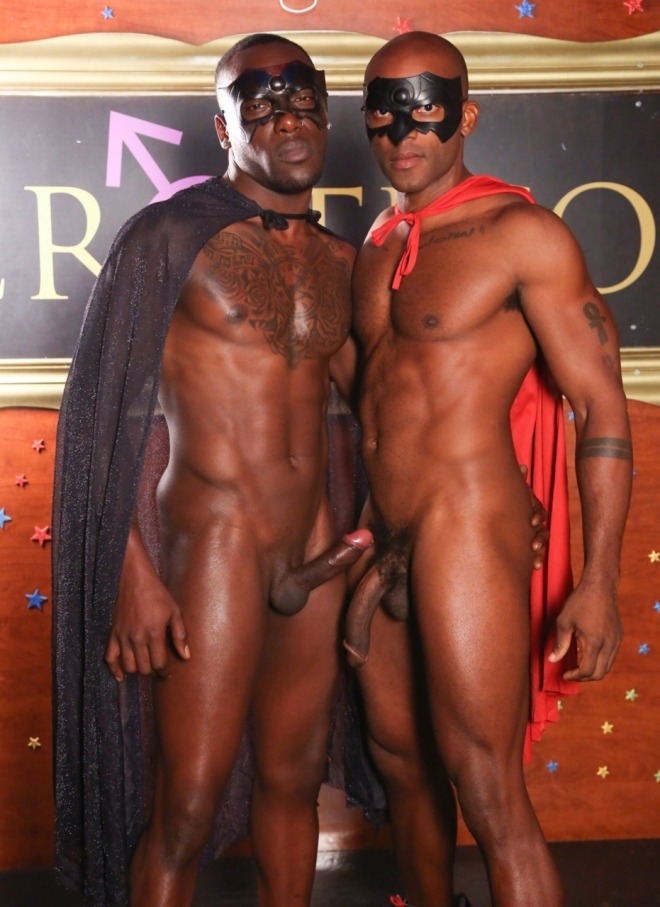 Like it or not, Halloween has over the years become a holiday that has been increasingly absconded by adults in order to satisfy some unfulfilled juvenile developmental deficiency. It also appears to have gained in popularity among both the same gender loving (gay) and bare practitioner (naturist or nudist) communities as well. This post is not so much a commiseration of the this reality as much as it is offering some ideas and suggestions to my gay and nude brothers for celebrating Halloween this year.

For those reading here who don’t know, Halloween is observed each year on October 31. As this date may often fall on a week-night, the weekends before and after the actual date may be filled with many adult parties honoring the occasion. It’s at the discretion of the host or hostess as to when to schedule their event.

A comment on the gentlemen costumed above. Masks are always a favorite disguise for Halloween costumes and parties. They may not always conceal the identity of the wearer, but they often afford the wearer the illusion of anonymity. I guess that is the goal of wearing them.

Mask can always be as contemporary and current as for the duo above or an ancient traditional tribal one such as the man above is wearing. If one is unfamiliar with the nudity of the wearer, the historic variety definitely conceals the wearer’s identity better than the more recent types. Of course, the above guy may have some difficulty enjoying his refreshments during his Halloween gathering – especially if he hopes to maintain his identity as a mystery!

In more relaxed surroundings among close friends, some men may opt-out of the anonymous aspect of the costume and are proud to be seen as they truly are – a bare practitioner in a transparent costume without the benefit of any type or manner of mask. To each man their own preference! This particular guise is my personal favorite style for Halloween as I am a believer in bare transparency!

That’s yours truly, above, clothes-free, masked and in a very formal bow-tie. Obviously, I’m “dressed for success” for Halloween back in 2016! 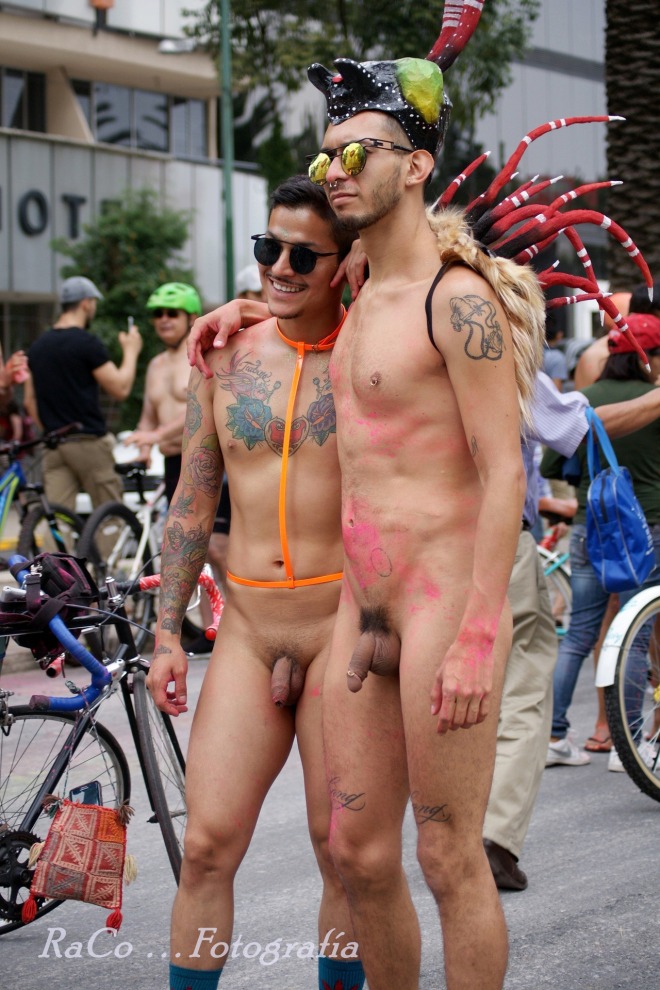 The couple above are unashamedly proud of their Halloween garb. I’m not sure exactly what their costuming represents, but to be honest, it’s not my place to judge them. They’re enjoying both themselves and their nakedness and that’s what is important. No one wants to be miserable in a Halloween outfit! Least of all, gay men!

In the gif image above, all the guys are stripping off their underwear because their Halloween disguises are to be naturists/nudists. Clever but hardly original. I think someone needs to inform them that perhaps they may want to re-think their choice. Once the clothes come off, they’re off until they’re put back on. Stripping bare only works once unless you’re willing to constantly re-dress continuously throughout the duration of the costume event. That is just too much expended energy to waste on what is supposed to be a social get-together!

Another guy in a business tie is giving himself a “thumbs-up” salute. I guess he’s the executive-in-charge of his section of the World Naked Bike Ride. That’s far better than carrying around a cumbersome bicycle while at the party! And let’s be honest here, I know all the other guests at his social are grateful not having to avoid being bumped by bicycle tires or handle-bars! 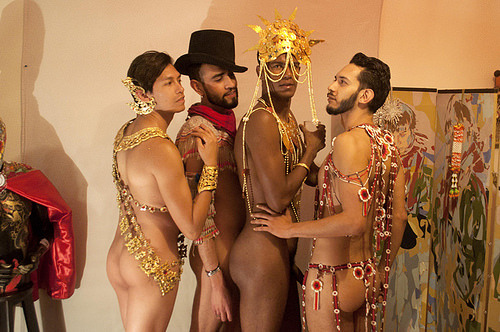 Halloween has always been the unofficial same gender loving (gay) holiday here in the USA. I guess this stems from the fact that for many years, the gay, lesbian, bisexual, transgender and queer (GLBTQ) peoples here were restricted by local ordinances that outlawed wearing clothing traditionally associated with the opposite sex. Coupled to the fact that simply being  GLBTQ was prohibited by law, pre-Stonewall, this occasion was the only opportunity they had a legitimate reason for dressing “outside” the norm and avoiding arrest and/or imprisonment.

Author’s Note: I don’t have any “official” data to support this theory. It is merely based on my supposition and knowledge of GLBTQ culture.

As to the popularity of Halloween among the community of bare practitioners, I haven’t a clue except that maybe it was the one time of the year where we could use the date as an excuse to parade ourselves in minimal (if any) attire. It doesn’t require a “rocket scientist” to create costumes that significantly highlight the obvious: we’re clothes-free!

Another reason for Halloween’s popularity among bare practitioners possibly relates to the fact that since clothing constitutes much of our lives, any event that affords us the opportunity to gather as a social nudist community and model our “bare” ability to adopt minimalist costuming creativity is guaranteed both enthusiasm and popularity. Aside from Mardi Gras and Halloween, where else can we showcase our talents?

It is evident from this post, within the same gender loving bare practicing community, for the Halloween holiday almost anything is acceptable as long as far as costuming is concerned. The sky is obviously the limit!

My plan is to publish one more Halloween Prelude post here on ReNude Pride next Monday, October 29. The theme for next Monday’s post is body-painting, using your bare body as a remarkable and unique human canvas! Caution: you need to provide your own artist! All this in time for every reader to be prepared for  both a ghastly and a ghostly Halloween on October 31!