On this date in 1918, the armistice (end of belligerence document) effectively brought an end to the death and wounding of the Great War, World War I. Although the fighting ceased, the war itself was only on a temporary cessation until a permanent peace treaty was signed by the belligerents. That fact occurred on June 28, 1919. One hundred years ago this year.

On November 11, 1918, the celebration that has come to be known as Armistice Day was first observed with the silence on the battlefield and the ringing of bells and congregations of the masses in the capital cities of the victorious nations. The defeated power, Germany, immediately began the solemn retreat of armies from the war fronts back to the homeland.

The Treaty of Versailles is the official name of the peace document that officially ended the hostilities of the Great War. It was created at the Paris Peace conference and signed by the warring powers on June 28, 1919 – the fifth anniversary of the murder of Archduke Franz Ferdinand of Austria, the heir to the throne of Austria-Hungary and the event that historically provoked the war.

The Treaty of Versailles, because of the excessively harsh terms imposed on Germany, is often blamed for the emergence of Adolph Hitler and World War II. However, the treaty cannot be credited as the sole cause of World War II.

On November 11, 1919, in the victorious powers of World War I, Armistice Day was observed as a tribute to all of those who died during the war and of the victory that restored peace to the world. It was a day of joyous celebration and of eternal gratitude for sacrifice.

In most of the European countries, the name of Armistice Day was retained from the date in 1918. In the United Kingdom and the Commonwealth, the date became known as Remembrance Day in memory of those who sacrificed their lives for victory. This particular occasion for remembrance now recalls all of those who gave their lives in the service of both country and crown and is not restricted to solely World War I.

In the USA, it became known as Veteran’s Day, in honor of everyone who served in the armed forces. Since the aftermath of the Civil War in the USA, the Memorial Day holiday in May of each year salutes those service-persons who lost their lives.

The red poppy has come to symbolize remembrance for all of those who sacrificed their lives in the military and naval service of their particular country. The poppy is a flower that grows wild in the fields of northwestern Europe where the Allied and German armies fought for four years. This symbol is especially featured in both the United Kingdom and throughout the Commonwealth.

The red poppy as a remembrance token has experienced varying popularity in the USA. It was very well known immediately following the Treaty of Versailles but the recognition declined in the aftermath of World War II. Surprisingly, its significance has increased in the decades following the Iraqi wars. 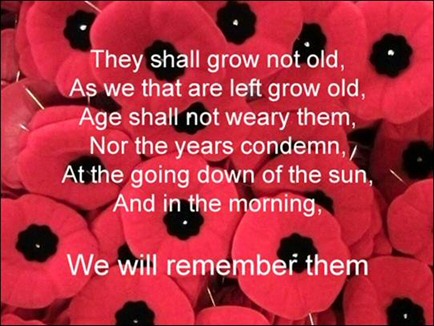 No matter what symbols represent remembrance, it is always a good practice to take the time and recall the supreme sacrifice others have given in service of their respective country. Their dedication in preserving their national sovereignty is indeed a cause worthy to being remembered and emulated.