Requiescat In Pace, Your Majesty!

Today marks the final Wednesday installment of a post commemorating October as GLBTQ Bare History Month here at ReNude Pride. Every Wednesday during October, which is GLBTQ History Month in the USA, we’ve celebrated this time as GLBTQ Bare History Month because there isn’t an entire month for us to experience exploring our common nude or clothes-free heritage. This combination allows us all to honor both our gay, lesbian, bisexual, transgender and queer community along with our bare (naturist/nudist) community simultaneously.

I’m intentionally offering a greater number of photographs with this posting. It will be another year until we observe another GLBTQ Bare History Month! 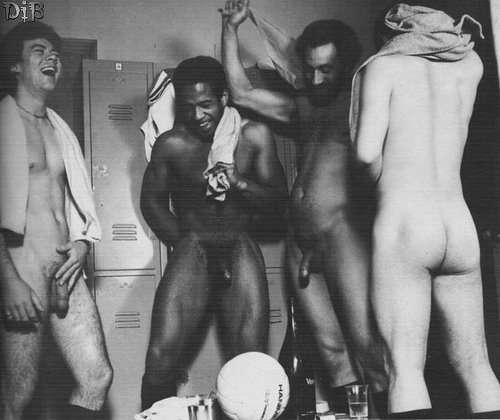 Communal nudity is the clothes free environment in which being bare is experienced by many at the same time, such as in a changing room, dressing room or locker room. Social nudity is the clothes-free environment in which being bare is experienced by all who gathered together in order to socialize. Social nudity is by choice and voluntary. The same isn’t necessarily true for communal nudity. The above image is an example of communal nudity as they are all inside a men’s locker room. This dates from probably the early to middle 1960’s.

In the above image, the subject is posing looking through his legs back into the lens of the camera. Whether this was his idea or his photographer’s idea, we’ll more than likely never know. Judging from his inverted hair-style, this photo was made between the middle to late 1960’s. Given the man’s physical development, it seems to be in his early twenties. 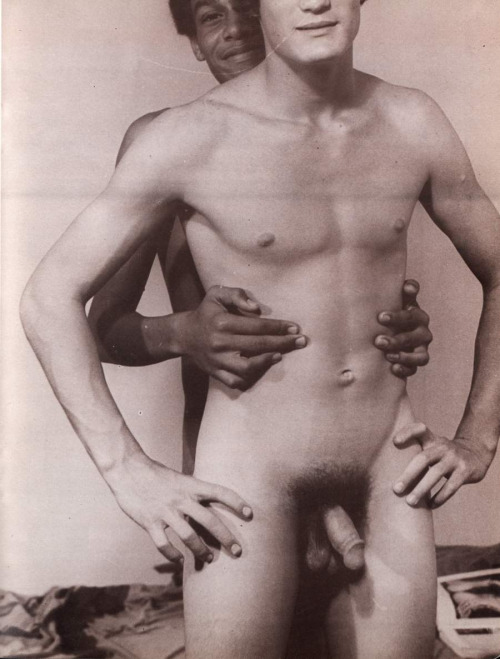 The above photograph depicts two young men, likely teenagers judging from their physical appearance, in a friendly yet familiar embrace. The teen who’s face that we do see is enjoying the closeness. I included this picture because it would have been considered very radical at the time. During the period, there was simply very minimal social interaction between the different races. The fact that these two guys are actually touching one another was almost unheard of. This photo was perhaps taken from the late 1950’s or early 1960’s.

The two men in the photo here aren’t in the least bothered being photographed showing their full-frontal nudity nor concerned over the proximity of their bare bodies to one another. Given the physical development of their individual bodies, they are likely between their late teen years into their early twenties. Once again, this image dates from the late 1950’s to early 1960’s, based on their hair-styles. This photo also features physical contact between two guys from two different races, highly unusual during this period. 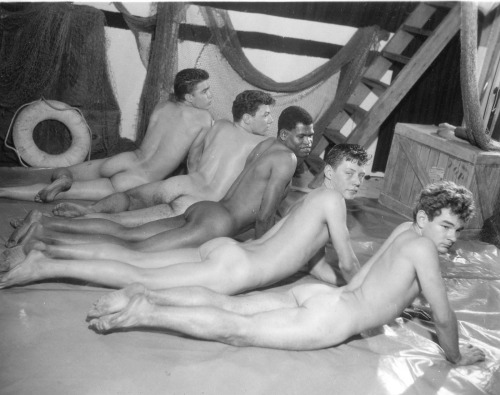 This photograph looks to be from a stage-set for a live production of camera-shoot. It appears to represent a ship’s deck. All the men pictured here seem to be in their early twenties and the time looks as though the middle-to-late 1950’s. None of the subjects indicate any discomfort with being bare around one another or in front of the camera, even though all that we see are their naked buttocks.

Of all the photographs featured here for this final October is GLBTQ Bare History Month post, this one is my personal favorite. More than likely because it closely resembles my marriage to Aaron, my husband. This picture indicates a mixed-racial intimacy (kiss) that may not have been unusual during the late 1960’s, as the hippie movement and youth revolution was underway at that time. What is somewhat unusual for that period is the shaved (bald) head of the man on the left. Most men, regardless of their ethnicity, wore their hair much longer. This photo was definitely after the Stonewall Riots of 1969 as it clearly indicates the men as being completely at ease leading into their kiss.