To write here that I am just “super angry” is an intentional misrepresentation of exactly how furious I indeed am. However, rest assured that no one really wants me to use the language that I am currently thinking. I’m sure that are profanity police floating through cyberspace to protect the innocent against such a crime. I refuse to be manipulated and roll in the gutter only to climb out of said gutter and discover ReNude Pride censored or worse, even cancelled.

That’s happened to me once before here. It isn’t an experience that I care to repeat. So let me move back into my current rant and leave the past to bury its own dead. And before I digress again, for background on this post, please read New Class This Year! Click on the post title to be directly linked.

Now to return to our regularly scheduled tirade featuring one crazed Greek and one super angry Deaf man: all conveniently packaged into one bare body! I promise this much, no profanity from this point forward. At least, for the duration of this particular post. Beyond that, since I’m uncertain as to what the future has in store, I’m not making any promises that I might be unable to keep.

This past Monday was the beginning of our Spring semester – and the first day of classes after the Winter holidays. That it was a cold day but with sunshine after almost an entire week of overcast skies and rain showers was bad enough. That the day happened to be a Monday was tolerable. Add to that the fact that I had to take over the class of an esteemed colleague who was snowbound in Minnesota and that said class began at 8:00 a.m. only made tolerable dissolve into miserable.

As my colleague’s students filed into the lecture hall, more than a few were carrying their newly published copies of the university’s summer catalog of classes and more than a few were excited and enthusiastic about the content. So much so, that I began to wonder what type of disinfectant they used when cleaning this space as these students were decidedly inhaling something that was altering their mental state.

Two of the students, whom I knew from previous semesters, asked if the summer schedule was accurate. I replied that I assumed that to be the case. Then they hit me with their “rocket propelled grenade:” “But we didn’t think you taught summer school!”

One young man approached the podium where I stood and opened his catalog and pointed to a highlighted square on the page.

Boxed in a purplish-blue color, under the heading of the School of Inter-Disciplinary Studies (SIDS) was the class. It’s title is: The Treaty of Versailles Centennial: Impact on the Future of the Twentieth Century. Yours truly’s name was listed (boldly in black type) as one of the professors. Under prerequisites for this class was listed the previous class that I had co-instructed for the SIDS, The Hundred Day Campaign: The End of the Great War.

Knowing that I had to manage my temper, I tried not to let anyone see the anger that I felt surging through my body. I counted (silently) to twenty before I even attempted to offer any comment on this information. After all, I reminded myself, none of this is the student’s fault. They are but the messengers.

By the time my colleague’s class had ended, it was time for my regularly scheduled class to begin. I quickly tossed out my planned agenda for this class as I figured that I had calmed down enough to put my concerns in writing. I assigned the students a writing assignment and while they were writing, I sent off an email to my department chairman asking if he was aware of the summer schedule and my curiosity as to why I was just being notified of this adjustment by students on the first day of spring semester. I had no official notice from the university and no addendum or codicil to my signed tenure memorandum of understanding. That being done, I returned my attention to the class.

Barely had ten minutes lapsed from sending my email and I had a text message from my department head. He and the assistant dean for the summer session were on their way to my classroom to meet with me. When they arrived, I could read my department chair’s expression and knew that he was very upset.

The assistant dean for the summer semester began communicating with me when she was interrupted by my department chairman. He apologized and then proceeded to explain to me that a terrible mistake had been made and that he was expressing the university president’s remorse, his own sincere regrets and their apology on behalf of the School of Deaf Culture and Deaf Studies.

I immediately thought: “Okay. Someone has thrown the baby out with the bath-water and the cover-up is underway.” I kept my cool and asked them to allow me to dismiss my students and meet them in my office in five minutes. My students did not need to witness this conversation or blame-game. They both nodded their assent.

My “class-clown” (an exceptional student who is known around campus to “tell it like it is”) remarked upon being excused: “Professor Poladopoulos, you never let us watch you make the authority figures have to shovel their own shit!” I gave him the “evil eye” and ignored his comment, focusing instead on my two senior colleagues who were, at that point, looking exceptionally uncomfortable.

On our way to my office, we passed the above-mentioned “class-clown” and I winked at him as we made eye contact. I wanted him to know that I was not upset with him. (As an aside, I saw him several times this past summer at Sandy Hook Beach, a nudist beach in New Jersey, just outside New York City).

We reached my office and I closed the door after hanging my sign that read: “In Conference. Do Not Disturb.” I wanted to make certain that I understood completely whatever was about to be shared with me. Within a minute of having shut the door, my office lights flashed indicating that someone was at my door. My department head received a text message from the Dean of the School of Inter-Disciplinary Studies; she was outside my office door hoping to join us.

I opened the door for the Dean of SIDS and immediately had to go off in search of an extra chair. My tiny little office was beginning to look like a meeting of the U. N. General Assembly. I managed to locate a folding aluminum chair (most uncomfortable) and returned to my office. I was not about to surrender my comfortable desk chair to anyone else except my own buttocks!

The meeting began with my department head, on behalf of the university president, expressing an apology for the “unfortunate circumstances” surrounding my notification of the new summer schedule. Although no one, I was assured, intentionally wanted to disrespect or insult me, in trying be considerate of my feelings surrounding my father’s demise, the lines of communication had somehow gotten skewered between my department, the university administration, the SIDS department and the Summer School. It seemed everyone involved thought that someone else would discuss my participation in this class.

The end result being that no one had actually even mentioned my involvement to me. I was blindsided by the students who were excited about the class. I was told that the university president was deeply embarrassed about the entire affair and seriously regretted the severe lack of communication between schools and departments within the university “family” and his assurances that this matter would receive the highest priority in any future planning of intra-scholastic cooperation.

My department head then repeated apologies again and expressed the hope that I would extend my cooperation and knowledge to the deserving students who were eagerly anticipating my facilitation in the summer’s instructional program. In other words, teach the damn class, please!

A typical act of contrition with no one owning responsibility but everyone so very sorry that it happened. I can live with this outcome. The next day my department head shared with me – in strictest confidence – that the university president was most disturbed by my anger and my veiled threat of a lawsuit against the university.

I replied to this comment that it wasn’t a threat. It wasn’t ever my intent to sue the university. What I sought was accountability and that it was quite evident to me that there was none as far as the university was concerned. Which I felt was a damn shame. Since we were responsible for preparing these students to mature, learn and thrive, we should be worried when we were unable to abide by the same life lessons. 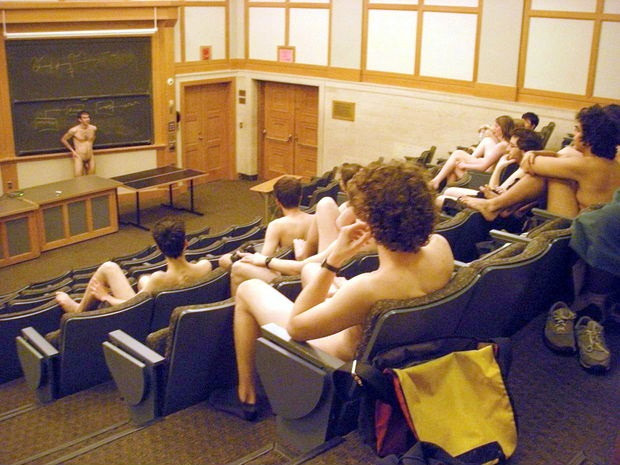 The sad reality is that with the summer class, my outdoor bare time – my time for me – is seriously curtailed. My day trip options to the river front sanctuary that I often retreat to, planned or on a last-minute whim, is compromised and my options limited to planned excursions only. Perhaps I should ask permission to teach clothes-free!

I know that “Class Clown” would enthusiastically support a student-led drive to have it declared a clothing-optional classroom!

Author’s note: After I drafted the above post this thought occurred to me. The last day of the Autumn semester, I was upset. Now, the first day of the Spring semester, I am, yet again, upset. Am I being paid enough to do this job?

Second anniversary month of publishing ReNude Pride here and I continue to leap in excitement and wonder!