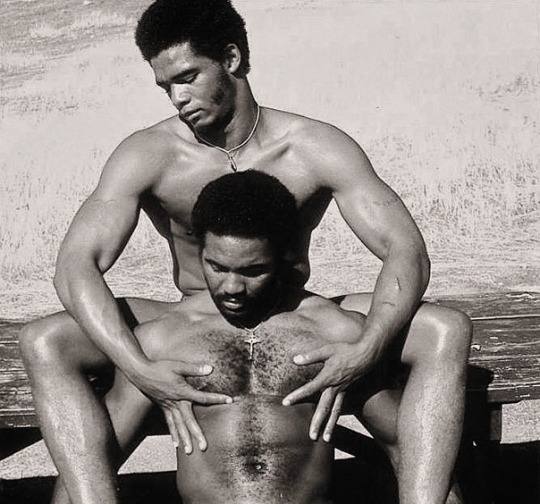 In commemoration of February being Black History Month here in the USA, a photo-oriented post showing some historical (vintage) images of Black gay bareness from days gone by. These are offered in the spirit of historical celebration and trying to document the tradition of gay, nude Black men in the recent history of African-Americans. Many of these photos date from the mid-20th century and often feature unnamed men whose life story, their personal history, is simply unknown and can only be speculation.

The picture used as the heading for this post, above, shows two men in a semi-embracing pose. Both are nude, and their physical proximity suggests a possible physical intimacy. Their hairstyles indicate early 1960’s to middle 1960’s. The fact that two men, naked, posed so close to one another hints that they were both either gay or bisexual. During that era, men who had sex with other men were collectively referred to as homosexuals at best and deviants or queers (or worse) as a pejorative. 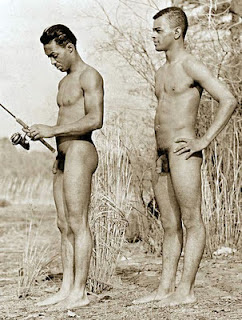 This second image dates from the middle to late 1950’s again using the hairstyle as a time reference. Both of the men are bare and indicate comfort with their nakedness in one another’s company. They are not attempting to conceal their nudity by resting their hands over their penis, as is common when men are unsure of being seen without clothing. The fact that there is a comfortable distance between the two men leaves us to wonder as to their sexual identity. The man on the left is holding a fishing pole which may indicate a relaxed day together skinny-dipping (swimming naked) and fishing at a lake or riverside. They are obviously confident with their bodies and their nakedness – what we today call “pride.” 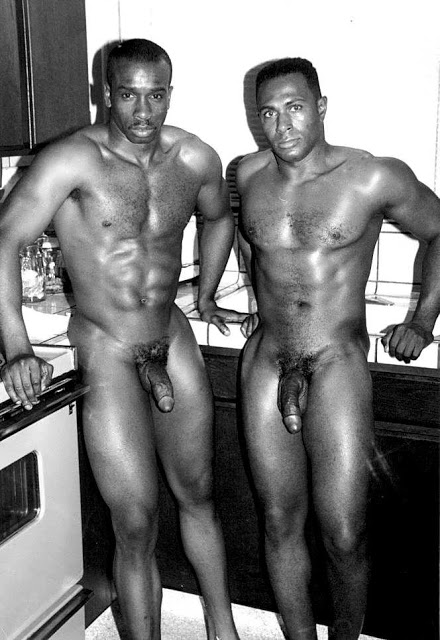 The above photograph is somewhat more recent than the previous two, The man on the right is J.C. Carter, a gay adult actor (porn) who appeared in films during the 1980’s and 1990’s. He lived in Chicago, Illinois, USA, at least during the middle 1990’s. The hairstyles are common with that period in time. Mr. Carter, in publicity articles for his movies, openly acknowledged to both the press and his fans that he is gay. The picture is possibly from the early days of his career as by the middle 1990’s he was shaving both his chest and pubic hair on a routine basis. The other man with him is unknown to me, maybe a co-star in one of his films or a romantic interest. 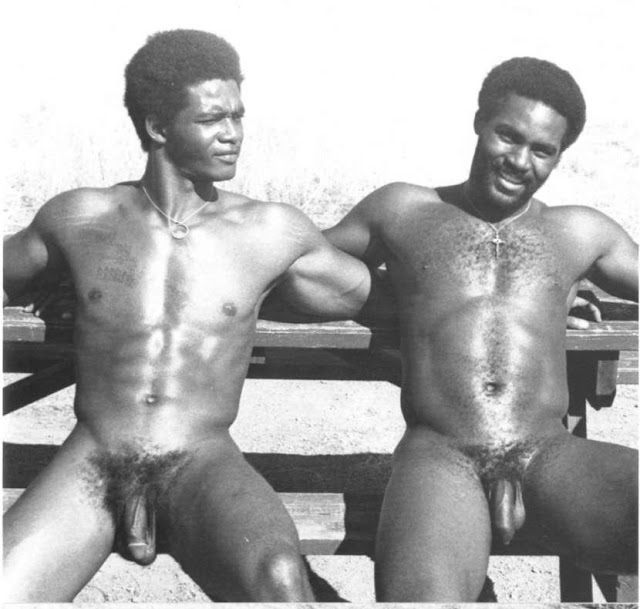 The picture above is one of my favorites as both men are obviously comfortable with sitting close to one another with open arms draped or intertwined together. They appear relaxed and completely confident in their shared nudity. Neither one exhibits even a hint of discomfort in being clothes-free or intimate. Possibly they are gay or at least, bisexual. Their hairstyles indicate the photo from the early 1960’s. 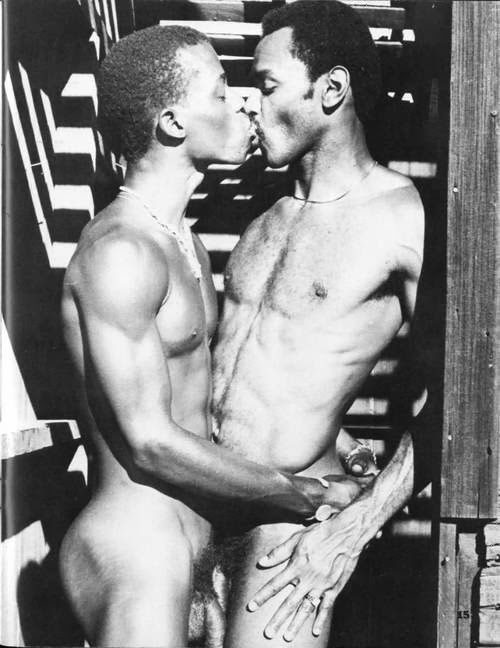 The photograph above leave no doubt as to the men’s sexual orientation. The fact that they are kissing each other on the lips tells us that they are either bisexual or gay. The haircuts indicate late 1950’s. The fact that the man on the left has his hands on his partner’s buttocks and that both their penises are touching proves they’re both same gender loving. While kissing, they both have closed their eyes, a sign that they are comfortable with one another and their nakedness.

Another telltale embrace and “on-the-lips” kiss with their penises touching reinforces the knowledge that the couple above are either bisexual or gay, or perhaps one of both persuasions. The man on the left has his pants pulled down to below his groin with the one on the right being completely bare. The hairstyles and goatees suggest middle to late 1960’s. Again, these two have also closed their eyes while kissing. 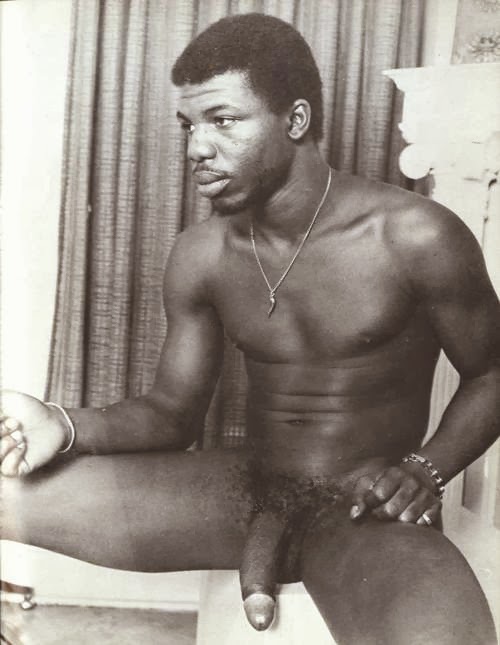 The man seated above gives us no indication of his sexual orientation but his body language strongly suggests complete comfort and confidence with his nudity. He’s making no effort to conceal his penis whatsoever. His haircut was a style popular in the middle to late 1960’s 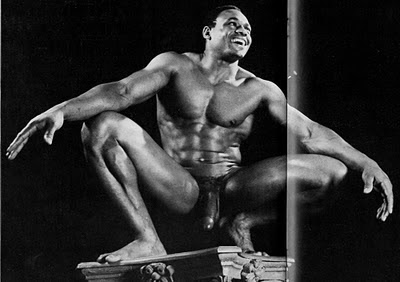 Another solo man who’s evidently relaxed posing and being seen fully bare. He’s smiling so he’s momentarily happy. He could be a professional model judging from the pedestal that he’s standing (kneeling). With his legs spread apart, he’s very proud of his penis (that may be the reason for his smile). His haircut is unclear but looks to date from the middle-to-late 1950’s. This image has the impression of a professional photograph so perhaps the subject is a professional model. 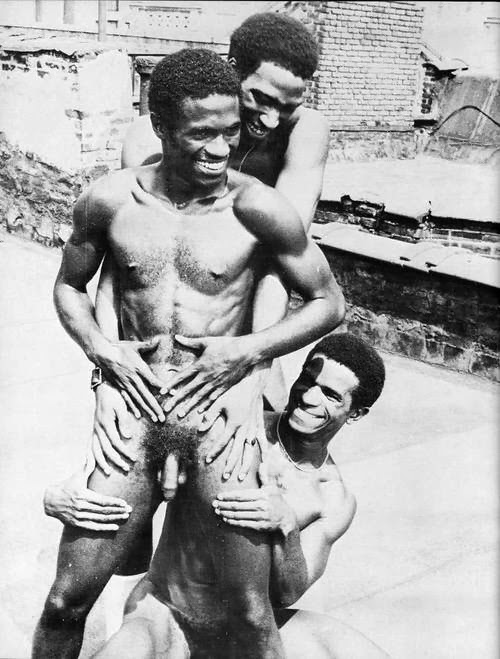 The trio of young men above are fully comfortable with their shared nakedness and with their bodies. One of the men clearly doesn’t mind his friend’s hands resting that close to his penis or having a buddy’s face in close to his buttocks. They seem to all enjoy each other’s company without clothing. They may be either gay or bisexual with possibly two of the men being intimate lovers. Their pose indicates that they’re having fun with their posing. The haircuts date from the late 1950’s to early 1960’s.

It is sad that not a lot of information about the men depicted here didn’t survive the test of time. With the exception of J.C. Carter in the third picture, we have no clue as to any of their identities. What is obvious is their comfort with being bare and being with one another. During this time period, the 1950’s to 1990’s, nude pride and body-positivity were not popular concepts and aside from their close circle of friends, homosexuality (same gender love or being gay) wasn’t usually shared with strangers.

All of these men were captured on film, whether spontaneous or posed, long before homosexuality – same gender love – was ever an acceptable way of life. That these men had to courage to do this in situations that even suggested a man-on-men attraction was bold and outside the norm of the day. Add to that the fact that they were all totally and completely naked only gives testimony to their fortitude. They risked both scandal and ostracism to do what they did: project themselves as proud, bare same gender loving (either gay or bisexual) men.

These images presented here miraculously survived this long. Given the racial attitudes of the 1950’s, 1960’s and the 1970’s, we are indeed fortunate that any of these pictures survived as long as they have. We also don’t know the identity of the photographers. How they managed to safeguard these photos is a story that I’d like to know. The legacy of the men featured hopefully will survive longer! 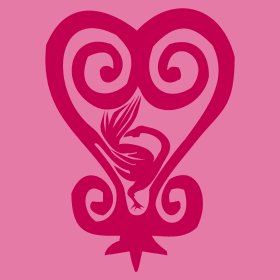