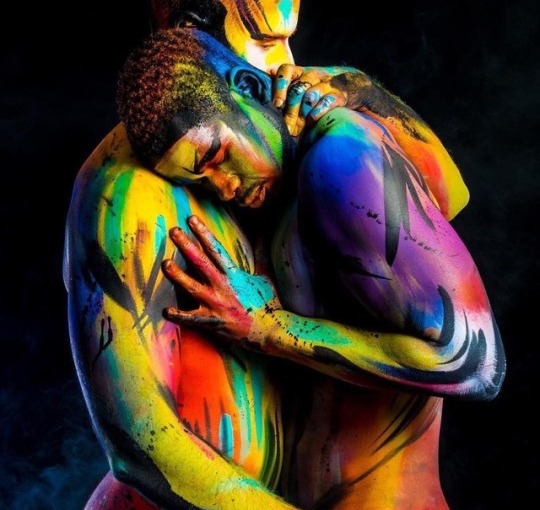 This is the week of Valentine’s Day (February 14, to be exact), 2019. So if anyone has forgotten, be advised that any excuse for ignorance is now null and void. Everyone reading or visiting here is now officially reminded that this date is almost upon us – and is fast approaching! Get busy and plan accordingly! This upcoming Thursday is the day to symbolically present our loved one with a token of our affection and appreciation.

Numerous layers of body paint can not disguise the fact that we are “in love.” True, it may fool a few for a short while. The charade may last for even an entire year or slightly longer. However, eventually, our level of commitment and devotion to one another will manifest itself in ways that are obvious to all. Two men in love can rarely, if ever, conceal their real feelings of love. It isn’t natural, it isn’t healthy and in doing so, it denies us our equality and invalidates our relationship.

Many within the gay. lesbian, bisexual, transgender and queer (GLBTQ) community have fought and waited for too long for the freedom and right to love. There is simply no way that any of us will abandon any of the long overdue freedoms now. Progress cannot be reversed without a fight. 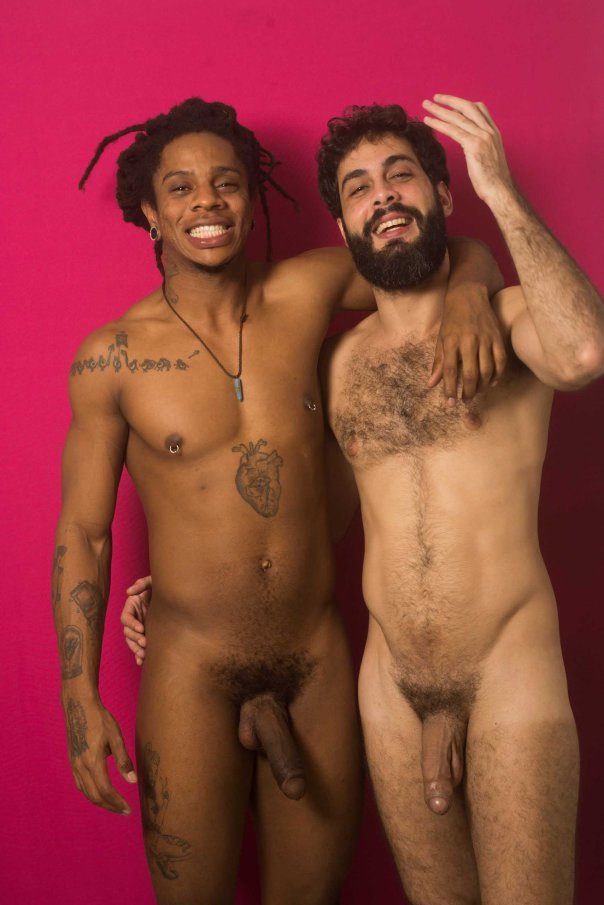 Government and society have tried to limit, outlaw, regulate or restrict our love in the past. In part, they were successful in stifling our self-determination. But we fought fair and we fought hard and in the end triumphed over legal and official oppression. In the end it was worth the struggle but the wait was unfair and totally unnecessary. We cannot allow this to happen again.

The Commonwealth of Virginia (where my spouse, Aaron, and I live) enacted the Racial Integrity Act of 1924 in the same year which specifically prohibited marriage between people classified as “white” (European descent) and people classified as “colored” (African-Americans, Native Americans and Hispanics). This legislative act mandated prison terms for up to four years for any violation. Laws against sodomy and illegal fornication separately  criminalized sexual intercourse outside of marriage.

The Racial Integrity Act of 1924 ensured that miscegenation (interracial marriage) was a crime in Virginia up until 1967. During the late 1950’s, Mildred Jeter (Black) and Richard Loving (White) met, fell in love and were married in Washington, D.C. Soon after, they returned to Virginia and lived in Caroline County.

Using the “Jim Crow” (official segregation of the races) laws, the local sheriff arrested them and thus began a legal struggle that assumed historic proportions. The Loving’s filed suit against the antiquated Racial Integrity Act and the case eventually made its way to the U.S. Supreme Court. In the infamous ruling, Loving versus Virginia, on June 27, 1967, the U.S. Supreme Court unanimously voided Virginia’s anti-miscegenation statute, Racial Integrity Act of 1924, as unconstitutional as bans on interracial marriage violate the equal protection clause of the 14th Amendment to the U.S. Constitution. Not only did this ruling outlaw Virginia’s statute, but it also voided similar laws in the sixteen other states that had a similar ban in effect. It also overturned a previous U.S. Supreme Court decision that upheld racial purity, Pace versus Alabama (1883).

In writing the opinion of the unanimous U. S. Supreme Court, then-Chief Justice Earl Warren wrote: Under our Constitution, the freedom to marry, or not to marry, a person of another race resides with the individual and cannot be infringed by the State.” Keep this opinion in mind as it has ramifications in the fight for marriage equality.

The Stonewall Inn Riots, Manhattan, New York City, USA, of June 28, 1969, are recognized as the catalyst of the modern GLBTQ civil rights grass-roots movement. As with all oppressed minority struggles for acceptance and equality, there were many powerful detractors and opponents against any concessions or recognition of basic rights. Foremost among those in opposition were the fundamentalist evangelical Christian, the extreme right-wing conservatives and the usual hate-groups such as the KKK, white supremacists, etc. These opponents lost no time in formulating strategies to confront and obstruct any hint of granting equality.

Perceiving the homosexual agenda (at that time, all GLBTQ persons were labelled as “homosexuals”) as an attack and a threat to the American way of life, family values and Christianity, the opposition began a war of lies, untruths, misrepresentations and intimidation that has repercussions even today.

The U. S. Congress was forced to restrict military service to closeted service-persons only. The policy of “Don’t Ask, Don’t Tell” became a joke as it acquiesced to fears by so-called “normal” men who objected to having to shower and be seen naked by homosexuals. Anti-gay ballot initiatives were published and shamelessly voted into law in many localities. And an overwhelmingly majority of the fifty U. S. states made marriage as binding only between one man and one woman, thus outlawing the possibility of gay marriage.

Clergymen stood in their pulpits and extorted even more money from their congregations to stop the shameless stampede of godlessness and homosexuality from beating down the doors of churches. Christianity was under heathen homosexual attack! No one and nowhere in the USA was safe from perdition!

Then a mysterious disease appeared on the scene (what would later be known as AIDS). Gay and bisexual men as well as injection drug users were dying shortly after diagnosis. Initially it seemed as though the homophobic rantings of the clergy were correct all along. God’s retribution against homosexuals was here and now.

Soon, women and children (the so-called “innocent victims”) became infected with AIDS. The numbers of the dying and the dead continued to climb and the general population reacted in fear and panic.

Next, physicians and scientists entered the picture. AIDS wasn’t divine intervention but rather it was a disease caused by a virus (HIV) that attacked and destroyed the immune system. It could be prevented through education and the use of condoms.

Reason started to replace the fear and panic. Slowly, attitudes started to change. Fear and hatred fell by the wayside and love and understanding took its place. As the fatalities from AIDS mounted, human compassion returned as the vilified anonymity of homosexuality was instead juxtaposed with the faces and names of co-workers, family, friends and neighbors who had succumbed to the disease. From pulpits, homilies of hate gradually began to disappear and prayers for mercy were offered instead.

The struggle for marriage equality in the USA mirrored the national mood. A mere twenty years ago, the clergy, the politicians, among others, could depend on large donations of cash and throngs of voters all by simply uttering homophobic diatribes. Moderation and tolerance, let alone civility, rarely, if ever, were practiced. Gay marriage was once again an assault on the American values of religion, flag and apple pie.

In the early years of this decade, then-President Barack Obama was very public and honest when discussing his personal “evolving” thoughts on the issue of marriage equality. His assured, calm and candid frankness served as an example to a nation that was tired of divisiveness and exclusion as its only option in responding to marriage equality.

Common sense and human decency (as well as love) won the day and on June 26, 2015, when marriage equality finally became the “law of the land” in all fifty states of the USA and its overseas dependencies, our President welcomed the Supreme Court decision in a speech in the Rose Garden of the White House.

“Progress on this journey often comes in small increments, sometimes two steps forward, one step back, propelled by the persistent effort of dedicated citizens. And then sometimes, there are days like this when that slow, steady effort is rewarded with justice that arrives like a thunderbolt.

This morning, the Supreme Court recognized that the Constitution guarantees marriage equality. In doing so, they’ve reaffirmed that all Americans are entitled to equal protection of the law. That all people should be treated equally, regardless of who they are or who they love.”   ~ President Barack Hussein Obama ~ June 26, 2015

“Love” may be officially repressed and suppressed, but it can never be eradicated. Laws may be legislated but laws alone can never erase love. Love is eternal and not even death can break its bond.

Body language is an excellent and fairly accurate determiner of how two people feel about one another. The images accompanying this post depict two men who, aside from the kissing, clearly are sharing non-verbal cues or clues about their attraction to each other. Smiles and laughter are two guarantees that something besides friendship is shared between the two. Other signifyers include touching one another as well as casual leaning into one another. Both of these indicate not only mutual comfort but also mutual trust, as well.

Two men in close proximity to one another, plus embracing one another with both of their penises touching gives us a clear picture of their shared intimacy. Neither one is reacting to the other in a way that a man would otherwise react to a male friend unless the level of intimacy was felt by both.

And this level of love isn’t limited to just Valentine’s Day. Love = love 365 days a year!

Don’t forget Valentine’s Day (February 14) is only a few days away!