To be honest, I didn’t watch the wedding of Prince Charles and Lady Diana Spencer on the television nor was I a guest for the service in St. Paul’s Cathedral in London. I was too busy with my undergraduate pursuits at university to be bothered with such frivolity and had only a passing interest (if even that much) in the doings of the British Royal Family. They had no impact on my bare life nor my educational goals at that time.

The birth of the royal princes ( Prince William then Prince Henry (Harry) later were just blips on my radar. Princess Diana’s trend-setting fashion statements didn’t make sense to me because a) I’m a man and b) I’m a bare practitioner (naturist/nudist). I had/have little use for clothes except where required.

As Her Royal Highness matured as an adult and as a princess, my thinking on the subject began to evolve. She was beautiful. She was graceful. She attracted attention. She was a dedicated public servant who chose to use her royal status for the good of all of humanity and to bring the spotlight on those who would otherwise be forgotten. She was a modern woman and a princess who didn’t live “happily ever after” with her prince.

But she did leave an enormous legacy to the rest of us and the world a better place for her having lived here among us. Those two royal princes that she birthed, Prince William and Prince Harry, continue Her Royal Highness, Princess Diana’s good deeds with their own lives and their own charitable pursuits. Both princes are fulfilling her dream.

I initially noticed the headlines when the Princess of Wales was featured in both the print and broadcast media’s reports of her being the first member of the Royal Family to not only touch but, indeed, to hug a man living with AIDS. This was before the then U.S. President, Ronald Reagan, had even uttered “AIDS” out loud. She was instrumental in dispelling the myth that HIV, the virus that causes AIDS, could be transmitted through everyday casual contact.

Her bravery in travelling through deadly land-mine fields in Angola not only highlighted the plight of those wounded through blasts but also led to international agreements to end their unregulated sales and distribution. Her efforts led to rehabilitation and training for those wounded by abandonment of “live” land-mines throughout the world.

Princess Diana’s works for the Red Cross and numerous children’s charities is legendary. She served as a force to be reckoned with throughout the United Kingdom, the Royal Dominions and the Commonwealth in achieving a better life for millions who would otherwise been ignored and remained invisible. This was particularly true for those who were marginalized by the broader societies in which they lived. These were the most vulnerable and were especially close to Her Royal Highness’s heart. 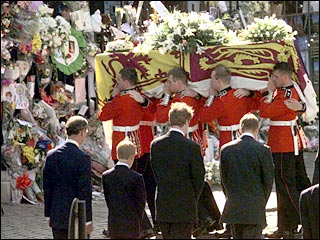 The above image shows the coffin of Diana, Princess of Wales, draped in the Royal Standard, just outside Westminster Abbey.

The death of Diana, Princess of Wales on August 31, 1997, shocked and stunned the world. Although it was twenty years ago today, in some ways, it seems as it was only yesterday. I remember waking up early in the morning and turning on the television and watching then U.S. President Clinton eulogizing her live on the White House lawn. I couldn’t believe the captioning as it read of her memory and good works.

I remember thinking: “What the hell?” Surely there was some huge mistake! Next I switched to a different channel but the broadcast was almost identical. Finally, I found the CNN broadcast which confirmed the news. I then went to the BBC America broadcast that delivered the entire story and showed a live broadcast of the Prince of Wales arriving in Paris to claim her body. This was then followed by the then-Prime Minister, Mr. Tony Blair, speaking to the media and referring to her as “the people’s princess.” And indeed, she was.

On September 6, 1997, a Saturday morning, I did watch her funeral, in its entirety, from Westminster Abbey. As Elton John sang Goodbye England’s Rose, I remember thinking: “Not just England’s Rose, but the entire world’s.”  Rest in peace, Princess Diana.

3 thoughts on “Diana, Princess of Wales”