This marks the first Wednesday installment of a post commemorating October as GLBTQ Bare History Month. It is probably best to remind everyone that the “B” in GLBTQ stands for bisexual and not bare. With that out of the way and clear to all, every Wednesday during October a post featuring vintage (old) photographs of bare men will publish here as a means of making amends for the tragic fact that there is not a Bare History Month celebrated nationally.

In many of these images, we have no way of knowing the actual sexual attraction of the men featured. What is obvious is that they’re all comfortable being clothes-free in front of the camera lens regardless of whether or not they considered themselves naturist/nudist. The theme for the photo-blog today is skinny-dipping.

Given the hairstyle and facial hair (sideburns and moustache) of the man in the above photo, this image probably dates from the late 1960’s to the early 1970’s. He’s proudly skinny-dipping along the beach and is unconcerned about his nudity.

The above duo are also skinny-dipping and my honestly be a same gender loving couple. The guy on the left has his hand draped over the other’s shoulder – this behavior was very unusual during this period in time in the USA, and unthinkable given the fact that they are both naked. Judging from their haircuts, the image probably dates from the late 1950’s to early 1960’s.

The skinny-dipper in the above photo doesn’t offer too much information as to time judging from his hairstyle. The color-scheme from the picture suggests mid-to-late 1970’s. 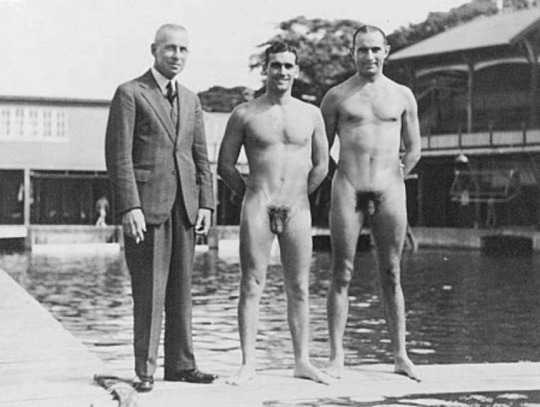 The hair-style of the men in the above photo indicate this image is from the mid-1950’s.

One trait to note in all of the above photographs is that the trend to manscape (trim and/ or remove all body hair) was not a popular idea during the decades when the above pictures were posed.